Known as the most widespread of all small Asian felines, the Asian leopard cat (Prionailurus bengalensis) can be found in twenty-one Asian countries.

This cat varies so much in coloration and size that it was originally thought to be several different species and given many different names, including Jerdon’s cat, Elliot’s cat, Sumatra cat, Java cat, and Chinese cat.

The leopard cat is about the size of a domestic cat, but has longer legs and look like a diminutive, more slender version of its namesake.

Its characteristics vary from a place to another, as will be shown in this article:

Distribution and habitat of the Asian leopard cat

In the northeast, it occurs in Korea and the Amur basin of the former Soviet Union.

In the west, it is known from Bangladesh, Assam, and across the foothills of the Himalaya to Jammu and Kashmir and northern Pakistan.

The leopard cat is found on the Indian peninsula in western Ghats to the far south of Coorg.

It is also known from other forested regions in eastern India but appears to be extremely rare or absent from the southern, mid-central, and arid western zones.

Asian leopard cats live in habitats from lowland tropical evergreen rainforest and plantation forests at sea level to moist temperate and dry coniferous forests in the Himalayan foothills at elevations of 1000 to 3000 meters.

Leopard cats are widespread in China and occupy temperate, subtropical, and tropical habitats.

In the Russian Far East, the species is known as the “Amur forest cat”. It is commonly associated with rivers, river valleys, forested ravines, and coastal habitats, where it lives in deciduous broad-leaved forests.

As it is mentioned before, the Asian leopard cat is similar to domestic cats in size. Yet there are some differences regarding each region. 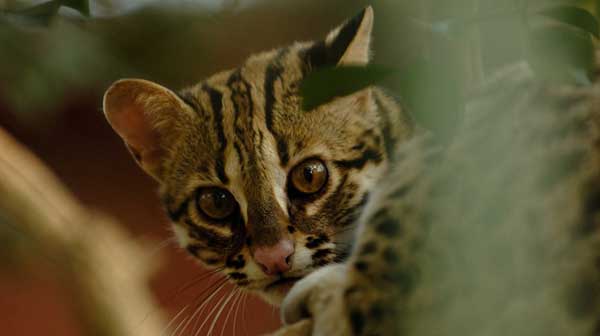 The tail is about 40 to 50 percent as long as the head and body.

Leopard cats from northern China and the Amur region of the former Soviet Union are much larger than those from Southeast Asia; indeed, a slim, normal-sized 2.5 Kg leopard cat from Sumatra would look like another species alongside two record heavyweight cats from Russia of 8.2 and 9.9 Kg.

However, the weights of northern leopard cats fluctuate seasonally and from year to year. With individuals generally putting on weight before winter and becoming much thinner by spring.

In years when rodent numbers are high, leopard cats have been described as “very obese”.

The Asian Leopard Cat fur’s color changes from a place to another.

Cats from the north are pale silvery gray, whereas those from the south are darker, being more ochre-yellow or brownish.

The coat texture is soft, and individuals from the north have long full coats. 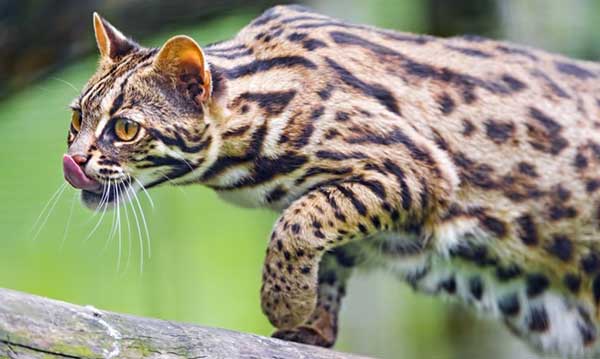 The tail is spotted, and there are a few indistinct rings near the black tip.

The head is marked with two prominent dark stripes that extend from the inner corner of each eye to the best of the ear. Two or three less distinct stripes also occur on the crown.

The muzzle is white, and streaks of white extend onto the cheeks, where they are bordered by two black lines, the lower of which may join a black bar across the throat.

The feet are narrower and longer than those of the marbled cat, and there are well-defined webs between the toes.

Most of the early anecdotal reports suggest that the leopard cat is strictly nocturnal. 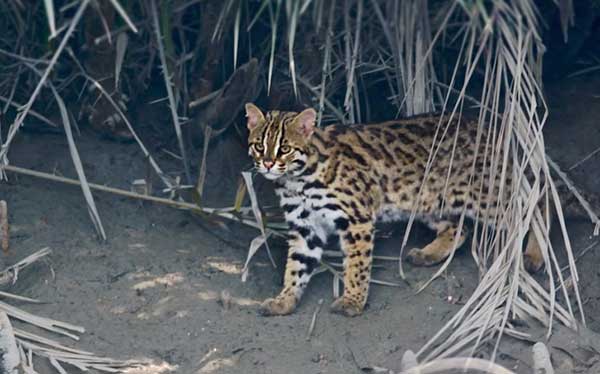 But radiotelemetry studies in two national parks in Thailand found that leopard cats were just as likely to be active during the day as at night.

Leopard cats are agile climbers and can be quite arboreal in their habits.

In the oil palm plantations bordering Tabin Wildlife Reserve in Sabah, leopard cats seemed quite at ease 3 to 4 meters off the ground as they moved lightly and easily among the palm fronds hunting rodents.

In ten of eleven attempts to locate the rest sites of radio-tagged leopard cats, the cats were found resting in dense, thorny undergrowth on the ground. 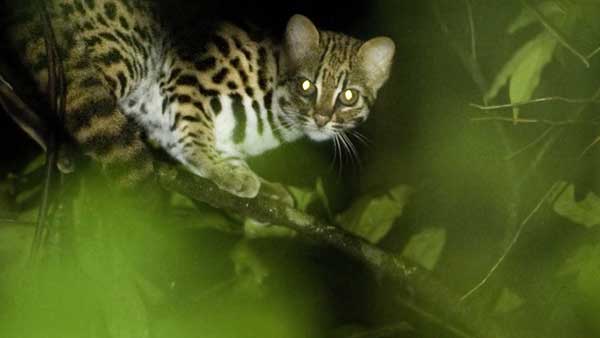 Although they preferred resting in dense cover and moving on the ground, in Thailand, radio-tagged leopard cats occasionally rested in trees.

Leopard cats feed on a variety of small prey, including mammals, lizards, amphibians, birds, and insects.

However, even the diets differ from a cat to another, where some cats prefer feeding on mice and rats, others tend to hunt various types of prey.

In Java, the cat’s diet was found to consist mainly of small ground-living mammals, principally rats, and mice. Although scars also contained large numbers of leaves of one species of herb.

Leopard cats have been seen in caves feeding on fallen bats and swifts. In some areas, the species is notorious for attacking and killing domestic poultry.

During a capture attempt, these cats tend to hold on to struggling prey, rather than dropping it and re-attacking. It is thought to be characteristic of felids that prey on fish and birds. Because, unlike a rodent, once released, a bird or fish may not be easy to recapture.

After a gestation period of sixty to seventy days, the female leopard cat usually gives birth to two or three kittens. 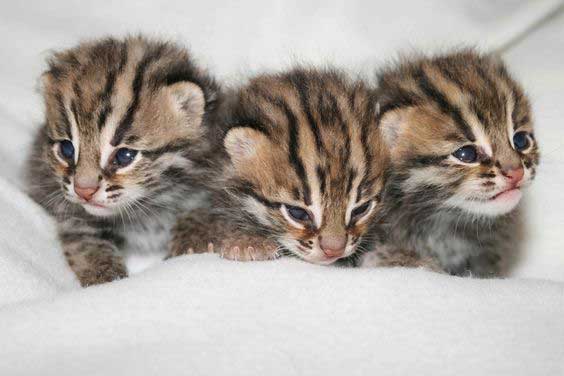 The kittens weigh 75 to 130 grams at birth, and they open their eyes ten to fifteen days after they are born.

In the wild, birth dens have been found in the hollow of a fallen tree, among bushes, and between rocks.

Kittens usually double their weight by the time they are two weeks old, and at five weeks they are about four times their birth weight.

Their permanent canines erupt at about four weeks, which coincides with their beginning to eat solid food.

The ability to eat meat results in rapid weight gain. By thirteen weeks, there is a tenfold increase over birth weight.

At thirty-seven weeks, the young are almost as large as their parents.

As with most felids, males grow faster than females.

In captivity, leopard cats are known to have had two litters in one year. But in the wild, they are more likely to breed only once a year.

Asian leopard cats have been known to hybridize with domestic cats, and the production would be a hybrid offspring that is known as the Bengal cat.

Asian Leopard Cat: the history of the Bengal cat 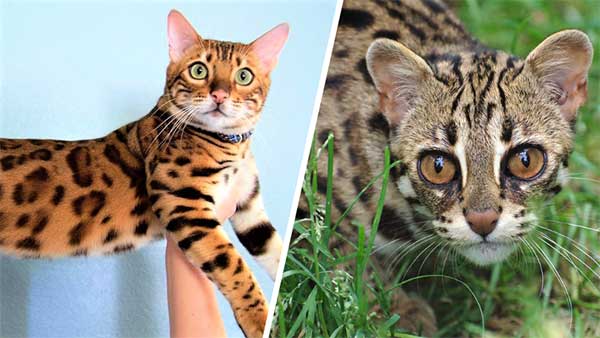 Bengal cat is the result of breeding a domestic cat with an Asian leopard cat.

The goal was to create a breed of domestic cats with the appearance of a wild cat and the character of a pet.

This breeding process took place for the first time in the USA. The first experiments were done in the 60s. Jean Sugden Mill, a cat breeder, who makes this first cross with a wildcat.

Years after, several studies were done at California University studying the breeding process. The results showed that the Bengal cats were partially immune to feline leukemia.

In 1980, Jean S. Mill decided to restart her breeding program from where she left off back in the 60s. 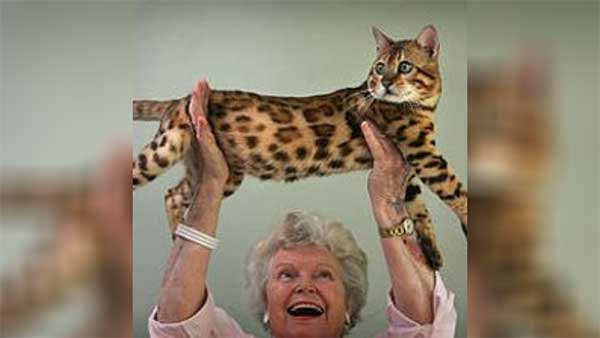 Progress was being made and the breed was officially accepted by The International Cat Association (TICA), in 1983, and began to show them around the world.

In 1985, Jean S. Mill showed the Bengal cat for the first time in the world in an exposition. Bengals today descend from cats bred by her in the early 1980s.

They are also gained breed recognition by The Governing Council of the Cat Fancy (GCCF) in 1997, Fédération Internationale Féline (FIFe) and The Australian Cat Federation (ACF) in 1999, and The Cat Fanciers’ Association (CFA) was one of the last organizations to accept the Bengal cat into their registry in 2016. 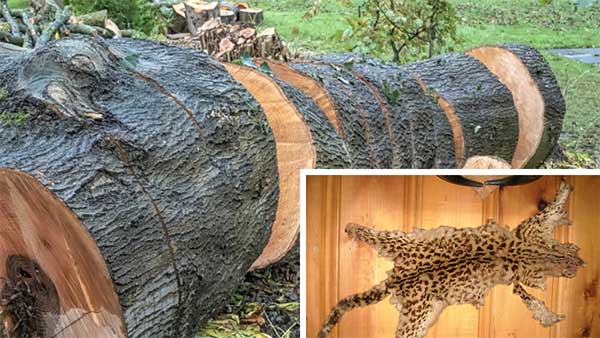 The primary threats facing the Asian leopard cat are deforestation and commercial exploitation.

The leopard cat is able to live near the human settlement and, though it prefers forest, seems able to adapt to secondary forest and successional vegetation.

Broad-scale habitat modification and forest clearance for agriculture, tea plantations, and exotic tree plantations are considered to be major threats to this cat.

Cleared areas replanted in exotic trees and plantation crops often lack the understory necessary for the cat and its prey to survive.

The Asian leopard cat is heavily hunted in many parts of its range, and leopard cat skins figure prominently in the fur trade.

Hybridization with feral domestic cats has been reported but is not considered a significant threat.

As it is mentioned before, the cross between the leopard cat and the domestic cat, which produced a new breed of domestic known as the Bengal Cat; this process had affected the existence of the pure leopard cat.

In Hong Kong, the Asian leopard cat is regarded as one of the protected species under the Wild Animals Protection Ordinance Cap 170.

The population status and trends of leopard cats are unknown.

They appear to be relatively common and widespread with stable populations.

In China, where the cat is most abundant in the subtropical regions and less common in the arid areas of the north and northwest, several hunt activities were targeting leopard cat fur. There is an average annual harvest of some 150.000 pelts.

Chinese records show that the highest recorded harvest was in 1963 when approximately 230.000 cats were harvested.

Many of the skins originating in China are exported to Japan.

Pelts of Amur leopard cats were formerly exported to China. Where they were used to make collars, hats, and jacket linings, but in recent years the number captured has declined.

WhorlsRosettesChevronFlanks
Area where hair changes direction (usually near the shoulders), creating a swirled patch of hairs; like a “cowlick”
Color pattern consisting of dark ring-shaped marks surrounding a patch of color that differs from the background color of the pelt
Triangular shaped spot
Body region between last rib and base of tail; includes the hip

Whorls located behind or even with armpits (position circled)

Tail, if present, is ringed unevenly and long enough to reach shoulders

Tail ringed unevenly, and too short to reach shoulders

Flanks with chevrons or triple-spot groupings that point toward tail 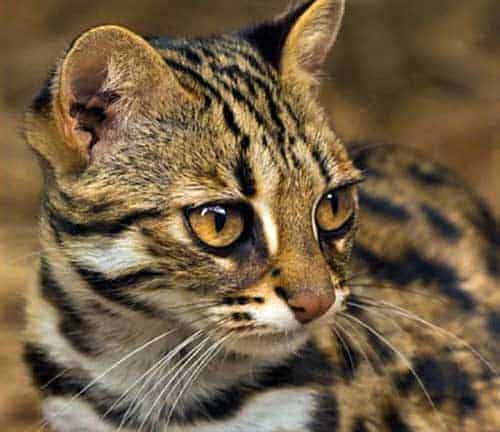 Get the best Bengal stories straight into your inbox before everyone else!