Cats are increasingly popular in homes around the world. The popularity of any breed changes year on year. What are the most popular cat breeds?

All cat breeds are great in their own ways, so take your time before making a decision.

Here’s a list of the top five most popular cat breeds:

The Siamese cat originated in Thailand, formally known as Siam. There are two versions, the original breed which is known as a Thai cat and the modern Siamese cat which was bred from the Thai cat.

The original Thai cat is a very old breed and is thought to have been around since the 14th century. It’s been mentioned in literature throughout history but became mainstream when it was introduced to England in the late 1800s.

Breeding to establish desired characteristics resulted in the Siamese that we know today. But The International Cat Association (TICA) and other cat organizations recognize both the Siamese and the Thai cat.

The Thai cat has features that are considered an old style with a more rounded head and body, than the modern Siamese which has a triangular head shape, large ears, and an elongated muscular body and coloration at its points.

The markings of this popular cat breeds are quite interesting. The pointed pattern is caused by a mutated enzyme that is heat sensitive. Which means that the parts of the cat’s body that are cooler developed the darker coloration, like the ears and face.

The distinctive coloration starts appearing several weeks after birth and gets darker as the cat ages.

Siamese cats living in warm climates have lighter coats than those who live in cool climates. The colorations include seal point, blue Point, chocolate point, and lilac point.

All Siamese have blue eyes. Siamese cats are very intelligent and affectionate and are one of the few breeds that will fetch objects like dogs. They want to be near people or other cats and are known to fall into depression if left alone for long periods of time.

Breeders like to sell them in pairs so they keep each other company. The lifespan of a Siamese, unfortunately, is shorter than other breeds. The median lifespan is between ten and twelve and a half years.

As for health problems, many siamese suffer from mammary tumors and urinary tract infections. Asthma and bronchial disease, as well as heart problems, are also common. They’re also often cross-eyed a condition related to the enzyme that causes their point coloration but they focus just fine.

Siamese is considered easy to groom they shed less than other breeds. Their personality is distinctive in the cat world not only do they fetch but they’re also talkative and opinionated. They’re socially demanding and anyone considering a siamese must be willing to spend more time with them than with other breeds.

Siamese is best as house cats. If allowed to go outdoors they’re susceptible diseases just like other cats, but Siamese can also be the victims of being stolen by people who want a beautiful cat without paying for it.

If you are considering a siamese keep in mind the personality traits they love to talk, they love to interact, and they love to be with you all the time. And consider getting a pair they’ll be much happier with someone to play with when you run out of steam. 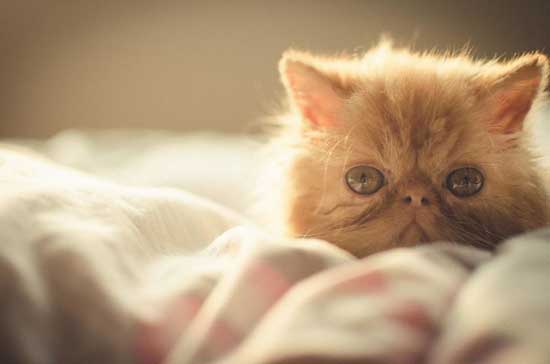 The Persian cat is the second most popular cat breeds. Also known as the Persian long-hair, is an elegant, graceful, gentle breed whose most distinguishing characteristics are it’s remarkable coat and its unique heads today. The Persian is one of the most popular of all feline breeds. Due to its exceptional beauty, temperament and easygoing disposition. While their basic temperaments have changed little over time, their conformation and overall appearance have changed considerably.

There’s somewhat vocal but very quiet again and they will respond to you pretty much as people if you talk with them they will answer back.

Persians are medium to large in size and stocky with short thick legs, massive drums, and distinctively curly profiles. The Persians head is broadly installed, round an unusually large for the size of its body. While its ears are especially tiny in comparison and are tufted which is called having ear furnishings.

The Persians eyes are big, round, and very expressive. Whatever their color deepest of eye color is preferred in this breed. The Persians open fancy light face is famously flat with a perky upturn nose and an extremely short muscle that is barely noticeable.

The coat of this popular cat breeds has also become more exaggerated over the years. It is extraordinarily long, silky, dense, fine, and profuse. The Persians coat requires daily grooming including brushing and combing along with regular bathing to prevent the development of nasty tangles and menace. This is necessary whether or not the cat is being entered in the show ring.

They should be housed exclusively indoors to protect their prized coats, as well as to protect them from parasites and other perils of outdoor living.

The Persians aren’t the best choice for a house boisterous children adults but they have no objection to being the object of a gentle.

It’s an excellent family cat. They will play with young children very gently and they’re really an ideal companion for a family with children.

The largest in our list of the most popular cat breeds. But it is probably one of the most sought-after of any cat breed. Regardless of size, they also stand out as a cat with a strong personality which creates a strong bond with their owners.

The Maine Coon is a breed endemic to the United States of America specifically the state of Maine. It is estimated that around 1850 long-haired cats came from Europe and Asia which then made it with local short-haired cats. The result was large cats with thick fur and a strong build.

We can define the character of the Maine Coon as friendly, playful, and sweet. In general, these are very sociable cats who enjoy the company of their owners.

However, to ensure the cat is balanced and sociable in its adult stage special attention needs to be paid when it is a kitten. The most important period is between three and seven weeks of age as this is the time the kitten must remain with its mother and siblings. This allows them to learn the feline language, hard to play with others, and learn bite inhibition.

At this point, they should also meet with people and other animals to prevent them from misbehaving when they’re older.

cats will love to play and have fun during all times of its life, including during old age. Like most popular cat breeds, Maine Coons are considered extremely intelligent felines capable of recognizing different words and even commands.

Being the owner of a Maine Coon is recommended only for dynamic families who are already familiar with cats. Taking care of a Maine Coon cat is relatively simple although it can be somewhat expensive mainly due to its large size. We refer specifically to its diet which should be based on high-quality products which can include homemade and raw foods.

Like all cats, Maine Coons will devote long hours to their personal grooming they will need some extra brushing at least a few times a week to maintain their long coat. This routine will help get rid of dead hair and keep their fur clean and beautiful. It will also help us to detect any skin problems for the presence of parasites. 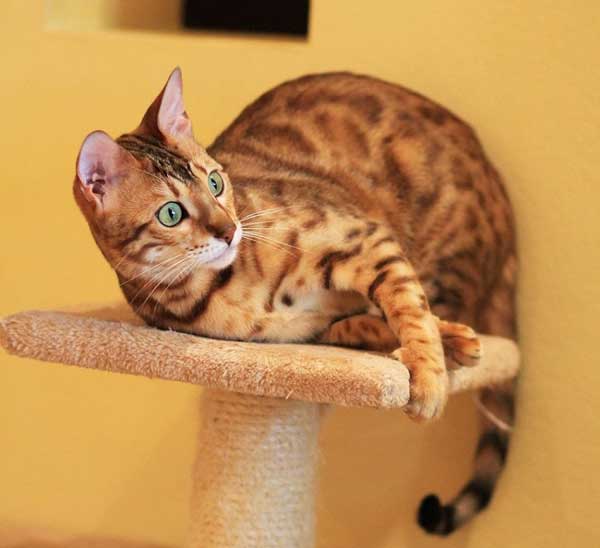 Bengal cat is one of the most popular cat breeds around the world. They are different from other breeds because they’re bred with the Asian Leopard Cat. The ALC is a small forest rolling cart which is found in southern Asia. With the goal of creating a confident, healthy, and friendly cat with the highly contrasted and vividly marked coat.

The name Bengal cat was derived from the taxonomic name of the Asian Leopard Cat. The scientific name is “Prionailurus bengalensis bengalensis”. Bengals are an intelligent and active breed and are known for being especially vocal and friendly.

Bengals come in arange of colors: browns, snows, and Silvers. With the brown coloring, you can have more hot colored browns which are richer orange colors and you can have a cooler colored brown which is light more wheaty colored.

Your silver colors have the variation from very light white colorings to your darker more black colorings and then you also have a smoke coloring which is a silver smoke.

In your snow coloring, there are three main types of snow colors. There is a seal Lynx which is the lightest, they are born white with blue eyes, and they develop their markings as they get older. Then you have a mink that has a bluey-green eye, and they have their markings as a kitten. And with your seal mink, they are the darkest of the snows with a gold to green eye.

Bengals come in two different types of patterns. They come in marbled and in spotted.

The active and social Bengal is a perfect choice for families with children and cat-friendly dogs. Learns tricks easily and loves the attention he receives from children who treat him politely and with respect. 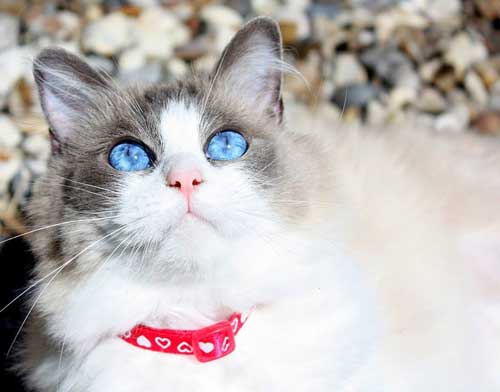 The fifth most popular cat breeds are Ragdolls. Even with the color variations, the Ragdolls all have one thing in common, they all have striking blue eyes. But the most unusual characteristic is how they react when picked up, they just hang their limp, they go limp when you hold them and that’s what they’re bred for just to be sweet, docile, gentle, and go limp when you pick them up.

Ragdolls are a fairly new breed and were developed by California breeder Ann Baker in the 1960s. They have great temperaments and are known to be more interested in humans than other cats. In fact, Ragdolls are called puppy cats because they love to follow their owners from room to room. And usually, play gently without extending their claws. They’re great with families, extremely good with dogs and with kids.

They’re also one of the biggest breeds. The ragdoll can be 3 times the size of other cats, these felines are large boned and strong with wide chests and big hindquarters.

The average life expectancy of the Ragdoll is about 10 years which unfortunately is one of the shortest life expectancies of domestic cats.

As for health problems, they are prone to heart kidney and urinary tract diseases. Grooming is essential as it is with all long-haired breeds.

So in general, Ragdoll cats don’t have too many health problems. Grooming is pretty simple a little brushing every few days and they do make wonderful family pets.

Do you have one of the aforementioned popular cat breeds as a family member? Tell us in the comment section below!

Get the best viral stories straight into your inbox before everyone else!